A difficult life molded Al into an obsessive-compulsive perfectionist. However, it is these very traits that led him to create the stunning architectural masterpiece that is his home. "I couldn't build the edifice that was the pinnacle of my life's expression until I stopped blaming others," testifies Struckus. 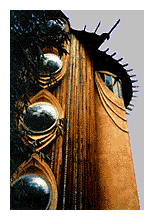 The dream he wound up creating in life did not begin until he reached the age of 62 and was finished just seven years before his death.

Do It ... you can always correct a mistake. You can't correct nothing." Al shares the inspiring story behind his philosophy.